February 12, 2018
Twas the night before Mardi Gras, and all throughout town
People were gathering, and partying down.
T-Boy was hanging out with his friend T'frere
And knocking back Natty Light without a care.
The children were running throughout the hall
With Tauntie yelling, "GO OUTSIDE, Y'ALL!"
Bernadette was drinking a strawberry daiquiri
While visiting with her sister who was down from Hackberry.
When down from the corner came such a sight
It was the po-po, flashing their blue lights
T'frere jumped up with a flash
"T-Boy! There's been a crash!"
The two friends ran down to the scene
And out from the wreckage crawled ol' Eugene
Now, that Eugene, sha, he was blitzed
He looked at his Oldsmobile, and boy he was pissed!
"Stand down!" yelled out the po-po
But that Eugene spun round and round like at a fais do-do
"T'frere, what the hell is this?"
"T-Boy, I think he's winding up his fist!"
Sure 'nuff, like a Popeye cartoon
Eugene hit that po-po like he was picayune!
At this point Tauntie ran up with two lawn chairs
("If y'all gonna rubber neck,  y'all might as well sit down right there!")
Then that po-po called in for back-up
Just as Eugene began to sober up.
Help arrived, and I swear as they cuffed 'em
That Eugene had a gris-gris look in his eye that was quite grim!
Before the po-po knew it, that ol' klutz
Head butted one and kicked the other square in the nuts!
And what do you think that Eugene yelled as he ran out of sight?
Why - "HAPPY LUNDI GRAS TO ALL, AND TO ALL A LIT NIGHT!"


*all spelling mistakes are intentional
**I do not condone drinking and driving or attacking police officers
***Happy Mardi Gras, y'all! I don't participate; but y'all be safe now y'all hear! 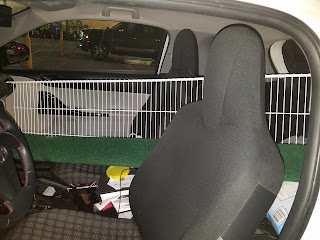